VAULT Festival (Waterloo) is amazing. Going along to experience their short plays/events is becoming a habit.

252AM (After Man) by Rebecca Pollock: 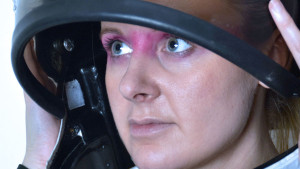 When planet Earth belongs to women, who will fight for the rights of men? All the men on Earth are dead, and have been for 252 years; a fault in the Y chromosome killed them off, so no new men can born and survive. The countries of the world have been sharing the stored sperm to create new generations of women, but supplies are running out. They have to find more.

Set on an inter-planetary starship, crewed by women, who after hundreds of years of searching have finally found a planet with a compatible male genotype. The question is, do they invite men from this new planet back to Earth in the hope of re-establishing the ‘old’ male-female family unit. Or do they capture men to take back for their ‘contribution’ to the new all female society?

When the Captain finds out about the hidden agenda (capturing men and not allowing male children to be conceived, except to be kept for their future ‘contributions’), she says something along the lines of, ‘So all these years I’ve been the Captain of a slave ship?’

In one short hour this play raised a lot of questions. It has certainly left me with a great deal to think about. The all-female Earth has no wars, is calm and seemingly peaceful. But history has been rewritten, with the work of male writers/artists/musicians now ascribed to women. Male artefacts are restricted to museums, and men themselves are portrayed as aggressive and controlling. Everything is decided by consensus, but it is a consensus that contrives to put women in boxes with specific roles (e.g. the highest honour is to be granted the status of a mother, but once granted, that’s your position for life–literally). So, are the women in this new and perfect society any better than the men they vilify?

There are plans to develop the play into a full length run. It’s something I would go and see.