The Amber Crown by Jacey Bedford

This book is a great read. I was involved in critiquing some of the earlier chapters, so I knew I was in for a treat. I wasn’t disappointed! The three point-of-view characters (Valdas, Mizra and Lind) are engaging and believable; I was totally invested in their loves, their dreams and their dilemmas. The novel inhabits an alternative version of history (not my usual go-to genre) that plays out across the pages with a sense of authenticity, which is not dispelled by the traditional use of natural magic by the Landstriders or the darker blood-magic by the antagonist.

I was gripped by the story and enjoyed switching between the point-of-view of all three main characters. Within the pages of Amber Crown you will find rank treachery and heart warming loyalty, some great fight scenes, sensitive sex scenes and, best of all, characters who discover who they truly are. There is a real sense of healing and completion at the end, at least for two of the protagonists. It’s a bit of an open question for the third.

To find out more, you’ll have to read the book!

Once Upon A Parsec

“Have you ever wondered what the fairy tales of alien cultures are like? For hundreds of years scholars and writers have collected and retold folk and fairy stories from around our world. They are not alone. On distant planets alien chroniclers have done the same. For just as our world is steeped in legends and half-remembered truths of the mystic and the magical, so are theirs.”

What’s in a name?

Interesting piece on the challenges faced writing fantasy in a historical setting. Have read Winterwood, and can’t wait for Silverwolf to come out!

When writing historical fiction it’s sometimes difficult to pin down names. Things change and sometimes the change is gradual. For instance I live in a tiny Yorkshire village called Birdsedge, or maybe it’s Birds Edge. No one really seems to know for sure. It’s currently in a state of flux and both names work. (My preference is for Birdsedge to be all one word.) When I first moved here in 1980 the village sign when approaching from one direction said Birds Edge, but the sign when approaching from the other said Birdsedge.

Confused? You will be.

An old diary (Adam Eyre’s Diary) from the 1770s called it Bursage and if you listen to some of the long-time residents they pronounce it something closely akin to B’zzidge, the vowel after the B being an uh sound that’s not quite E and not quite U. (A schwa?)

Guess where I’m going to be in just a couple of short weeks? The GollaczFest, of course! I attended last year and it was a real treat. 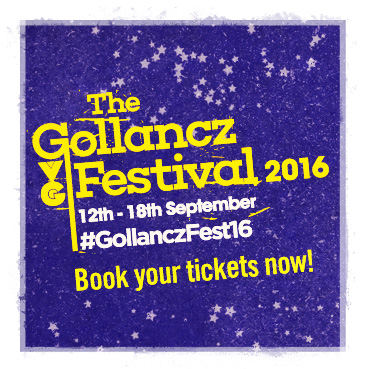 The panel discussions were particularly interesting, with authors giving candid views on topical issues. I especially loved the way Gollancz used the event to promote its debut authors.

This year I plan to split my time between the author panels and the events aimed specifically at upcoming writers. Have a look at the list of authors taking part. It’s going to be so  much fun!

Chilling out with Pratchett

There are times as a writer when I just need to step back and chill out. Give the creative side something else to do, a sort of re-charge of the writing batteries. 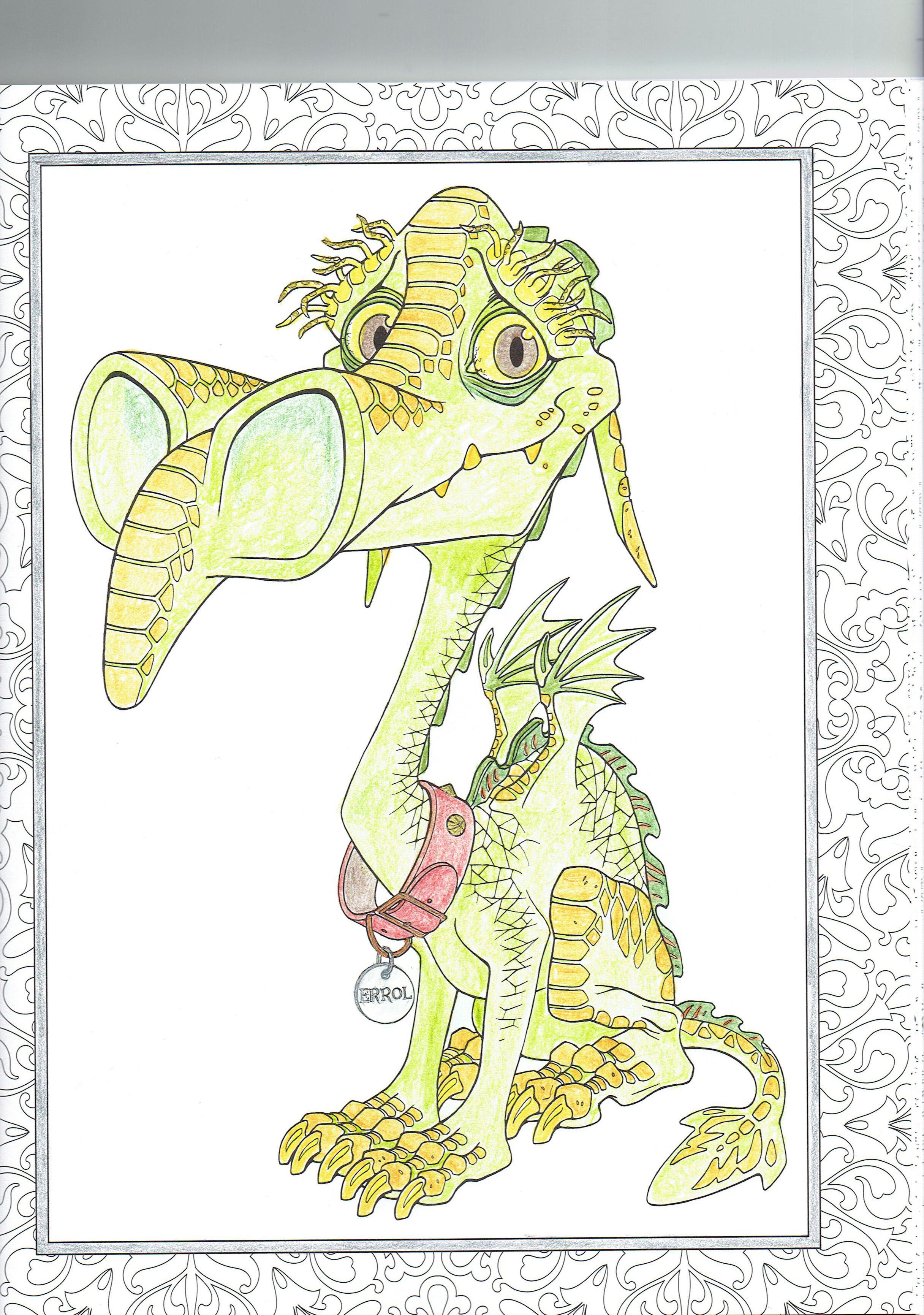 I love the quiet discipline of adding colour to someone else’s kick-ass drawings. I have several fantasy-type colouring books, but my favourite by far is the ‘Terry Pratchett’s DiscWorld’. It is packed with Paul Kidby’s amazing illustrations.

“The little dragon turned on Vimes a gaze that would be guaranteed to win it the award for Dragon the Judges would Most Like to Take Home and Use as a Portable Gas Lighter.”

Thank you Paul Kidby, and thank you Gollancz. I just need to decide what to colour next!

The third in the series detailing the life of Falcio val Mond and his constant struggle to save Tristia, his cess-pit of a homeland. Together with his fellow ex-Greatcoats, Kest and Brasti, Falcio fights to restore the ‘King’s

Law’, even though said king is dead—betrayed by the Dukes whose greed and corruption is driving Tristia to its knees.

The Greatcoats are magistrates with a difference. Re-envisioned by the late King Paelis, they are duellists trained in all manner of combat. They ride the roads of Tristia, hearing cases in towns and villages and delivering their judgements. Cases are often decided via trial by combat—the Greatcoats overriding mantra is ‘fight hard, ride fast’.

Traitor’s Blade and Knight’s Shadow are set after the death of the King, with the Greatcoats reviled as traitors, scattered around Tristia trying to both survive and follow their last, secret, orders from their King. Falcio rescues a teenage girl, Aline, who turns out to be the King’s daughter. The trio of Greatcoats fight Ducal intrigues, assassins, and a pretender to the throne in their attempts to have Aline recognised as the rightful queen.

Saint’s Blood continues the story, with their greatest adversary ever: an actual God. All three books are packed with fast moving action, as you might expect, with expertly drawn and compelling one-to-one fights and larger group battles. The action is underpinned by believable and engaging characters, which you can’t help but empathise with and root for.

The books are written exclusively from Falcio’s point-of-view, giving the reader an insight into a man who was driven into the role of ‘protector’ by the rape and murder of his wife—a man who inspires others to his cause, despite his many flaws. The relationship between Falcio and his two best friends, Kest and Brasi, is masterly portrayed. The female characters that take a lead role in the story are portrayed as intelligent, determined and a source of impressive strength.

Saint’s Blood opens our heart to fear and then demonstrates by acts of uncommon valour by men and women alike how to overcome those fears.

I’m looking forward to the next book: Traitor’s Throne.

I thoroughly enjoyed my time at FantasyCon this year. Great panels, great people and a wonderful atmosphere. Such a packed and varied programme that I (and plenty of others) skipped lunch in order to attend as many interesting and (to us writers) valuable workshops and panels as possible.

Needless to say, I took loads of useful ideas away with me. Here are a few little gems:

Quote: “The more I practice, the luckier I get.”

The last quote applies to fighting, but I think you can apply that to writing too!

There was lots of fun stuff to do in the evenings, of course. I particularly enjoyed the performed reading of ‘One for the Road’. A comic short story by Paul Kane, ably performed by James Barclay, Guy Adams, Lee Harris and Phil Lunt. They certainly brought to life the Four Horsemen of the Apocalypse!

The live edition of Tea & Jeapardy was excellent and very entertaining. Emma Newman, assisted by Latimer the butler, interviewed Brandon Sanderson over tea and cake (and a cursed shield). Great stuff!

I’ve already booked my ticket for next year’s Fantasy Con, to be held in the wonderful seaside town of Scarborough.

This was my first visit to BristolCon – a one day SFF convention. I have attended the larger events (EasterCon, FantasyCon), which are great (an understatement, really). BristolCon offered all the types of events (panels, workshops, author readings, art gallery, dealers’ rooms) that a larger convention does, just on a smaller, more intimate scale. I was going to say more friendly, but in my experience all conventions are unerringly friendly and welcoming.

I attended panels on lost cities and abandoned places, the rise of AI’s and FTL travel. The guest of honour interviews were both interesting and entertaining – Jaine Fenn (author), Jasper Fforde (author) and Chris Moore (artist). The workshop on Multiple Story Arcs, run by Jonathan L Howard was particularly useful.

Favourite quotes from the Lost Cities and Abandoned Places panel:

“We project onto ruins our own stories.” Jaine Fenn 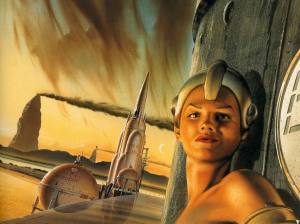 Half A King – Joe Abercrombie 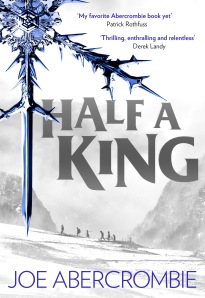 Just received my copy of Half A King by Joe Abercrombie. I’ve been waiting for it to arrive for months and now can’t wait to read it. This is Abercrombie’s first foray into the YA market—a market that I feel will devour his work and hound him for more.

At World Fantasy Con in Brighton last year, I listened with rapt attention as Abercrombie read the opening chapter of Half A King. It contained the now familiar—and much loved—accents of tension and gritty violence.

One audience member asked wryly: I thought you said this was YA?

Abercrombie replied with his usual humour: What? I can’t say ‘fuck’?

Humour aside, as Abercrombie explained in a recent (June) interview with Locus magazine, this novel is aimed at the ‘top end’ of the YA market. The book is shorter than his previous offerings, a modest 80k, and my only concern is romping to the end and being left panting for more. The sequel is planned for February 2015, and the final part of the trilogy in the autumn of that same year. Looks like he’s going to be VERY busy!

If you haven’t read any of Abercrombie’s work, there is plenty out there for adults:
The First Law Trilogy (The Blade Itself; Before They Are Hanged; Last Argument of Kings).
Plus three stand-alone stories set in the same world (Best Served Cold; Heroes; Red Country)

I started with the stand-alone books, become totally hooked and worked my way back to the First Law Trilogy. ‘Gritty’ is a word that is often used to describe Abercrombie’s work; his writing is also vivid, engaging and intense. Plus, he tells a bloody good story!

Over the last few months I’ve experimented with a couple of techniques that have resulted in three flash fiction pieces being published in the online magazine ‘Sein und Werden’ (Being and Becoming). Not a title you would associate with science fiction and fantasy writing, but the magazine does accept speculative fiction.

Try writing a short piece without one of the letters of the alphabet. It’s trickier that you would imagine. If you are feeling particularly adventurous pick a vowel. Don’t do what I did and choose the letter ‘e’ for your first attempt!

‘Writing is always constrained by something. Rather than ignoring, or attempting to free themselves from these constraints, the Oulipians embrace them.’

Check out the ‘Sein und Werden’ website for more on the Oulipians and their approach to writing. The OuLiPo edition is full of great pieces written with a variety of constraints. I have two pieces in the magazine: ‘This Is It’ written under my name, and a joint piece ‘Walk in the Rain’ (part of the London Clockhouse Writers submission).

The title I ended up with was: ‘I was simple in the haze of a smelly thunderbolt, but heaven knows I’m prehistoric now…’,

I had to smile, wondering what on earth I could do with that. Writing under pressure—given ten minutes to produce a rough piece as part of a group writing exercise—I wasn’t expecting to meet the teenage son of Thor in a deserted Tesco car park!

You can read the piece here, in the Surrealism edition of ‘Sein und Werden’.

Remember: Constraints are your friends; they will push you through boundaries and into a world that you never imagined. Go on, try it. It’s great fun, and who knows, you may end up with a piece that’s worth publishing.