This year’s British Fantasy Society convention took place in Brighton at the end of September—three days of workshops, panel discussions, author readings, interviews, and of course, fun. It wasn’t easy to settle on a navigable route through all the events, as so many would have been both valuable and interesting to attend. After filling the pocket programme with enthusiastic ticks, circles and asterisks against all the events I really wanted to attend, I finally whittled the choice down to what was feasible in the linear time frame available.

One definite area of focus for me this year was blogging: how, why and is it really worth it?

The convention offered two approaches: a Master Class on how and why to blog, and a panel discussion looking at the importance of blogs. The ‘Ask the Editor’ panel also touched on the benefits of engaging with social media.

Marc Aplin, founder of the Fantasy Faction blog, led an interesting and lively Master Class in the subject. Marc placed a great deal of emphasis on taking a consistent and professional approach to blogging, gave advice on creating a unique voice, and looked at ways to create and maintain momentum. He cautioned authors about using blogs for self-promotion, highlighting the close-knit nature of the blogging community. His final piece of advice: publishers, authors and other bloggers can make or break you—earn their respect and keep your values.

The ‘How Important are Blogs’ panel focussed on the value of blogs in raising the profile of authors and as a source of book reviews. Amanda Rutter (editor for Angry Robot’s YA imprint Strange Chemistry) viewed bloggers as an essential part of the process of starting and amplifying the conversation about books. Emlyn Rees (author, playwright and editor of Angry Robot’s crime fiction imprint) argued that while he liked the idea of online communities, he was not in favour of author blogs. As an editor, he said, he was horrified at the prospect of authors crafting 1000 word blogs on a daily basis. His heartfelt plea to all the writers in the audience was: Write Your Book First.

Adam Christopher (author of Empire State and Seven Wonders) suggested that up and coming writers post the opening chapters of their book online, which may then be picked up by publishers. Some authors, for example Corrie Doctorow, publish their entire book online. Amanda Rutter admitted that she does look at work published online—work that is receiving positive reviews—just to keep an eye on what’s out there. She cautioned that only a very small percentage of work was picked up by publishers in this way.

The ‘Ask The Editor’ panel, moderated by Nicola Budd of Jo Fletcher Books, emphasised that writers need be published in magazines, active in social media, engaging in the community and not hiding behind their books.

Overall, blogging does look like the way forward, though care has to be taken in creating the right persona and engaging positively with the blogging community. Oh yes, and making sure you leave enough time to write your book.

The ‘Blurring Genre Boundaries’ panel highlighted the tension between what agents and publishers say that they want—something new—and the fact that they are often mired in genre definitions. Jonathan Oliver of Solaris Books said that while he understood that agents liked to be able to categorise work in order to target markets more effectively, in his role as editor-in-chief he wanted to read something new, something that crossed the boundaries. The best advice came from Paul Finch (screenwriter, novelist, short story writer and journalist) who believed that there were no hard and fast rules.

The panel members were challenged to come up with examples of new genre mash-ups. Jonathan Green, who described himself as a genre mash-up writer, suggested ‘stone-punk’ and ‘stone-magic’, both of which sounded like great ideas. Jonathan made the point that when producing a genre mash-up novel a writer had to have a very clear idea of the boundaries that he/she was trying to mix.

Of the five Guest of Honour interviews that took place, I was only able to attend one. Brent Weeks, author of The Night Angel trilogy and The Black Prism, gave a practical and insightful recounting of lessons learned during the years he spent writing the trilogy, and his struggle to find a publisher. He used his experience of martial arts—personal expertise and research—to inform his fight scenes. He quoted the fact that he had an older brother as evidence of valid experience, to lots of nodding heads from the mostly male audience. When it came to social media, Brent admitted that while he does use Twitter, he does not have a blog. ‘I’m a perfectionist,’ he said. ‘It would take too much time.’ 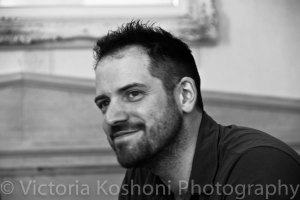 Author readings, too numerous to count, took place in rolling thirty minute slots throughout most of the three days. I found the time to listen to James Barclay (The Legend of the Raven, The Ascendants of Estoria, The Elves Trilogy) and Joe Abercrombie (First Law Trilogy, Best Served Cold, The Heroes), both reading from their new novels. James read with passion though a little too quickly, which is surprising given his acting background. Joe, a consummate performer, left his audience gagging for more. His latest stand-alone novel, Red Country, is now sitting on my bookshelf waiting for a slot in my rather extensive reading schedule.

I came away from the convention tired but happy, loaded down with books, and with plans to set up my own blog. Now all I need is time.

Follow Loving Life in the Rain on WordPress.com
Join 657 other subscribers