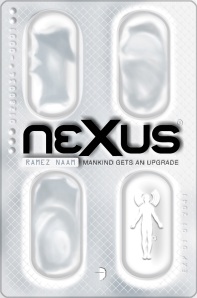 This book is set in the near future and looks at the impact of nanotechnology, specifically its ability to engender a form of telepathy in humans—the ability to link minds. As with all step-ups in technology, the impact of the drug Nexus has a multiplicity of possible benefits and opportunities for misuse—implications that the author brings to the fore through the struggles of Kaden Lane, the main protagonist.

Kaden is a young researcher who has redesigned Nexus—an illegal drug—to allow the drug’s nanostructures to be pre-programmed. The book opens with Kaden carrying out a field trial of the ‘Don Juan’ protocol. The ‘Don Juan’ protocol analyses his interactions with a young woman and controls his responses, changing a shy and diffident young man into a confident, smooth operator.

Enter, stage right, all the factions desperate to gain control of this drug (including the Emerging Risks Directorate of the United States, sworn to eradiate all such threats, which uses the drug to programme unwilling undercover agents). Underlying the machinations of international espionage is the battle for supremacy between human, transhuman and posthuman (definitions supplied in the effective use of ‘Briefings’ between chapters). The argument being that the widespread dissemination and use of Nexus could spur humanity into its next evolutionary leap—a blessing or a curse, dependent on which faction you belong to. The many explosive (literally) action scenes are effective and compelling.

The book is an absorbing read, with believable near-future scientific advances extrapolated from current technological research. The question is posed: do the benefits of such technology outweigh the undoubted misuse that will accrue from its development? This book is a cautionary tale that on occasion steps a little too close preaching. The final scene of a video extract is a step too far for me, with one of the minor characters making a political statement, fist raised in a revolutionary salute.

The image of Kaden and Sam (the other main protagonist) parting ways, each with their own ‘mission’ and unsure what the future holds, is for me the perfect ending for the book. Overall, a great book that is well worth reading.

Is this the one set in Hull? xx

Great post. I used to be checking continuously this weblog and I
am impressed! Extremely useful info specially the closing phase 🙂 I take care of such information much.
I used to be seeking this particular info for a long time.
Thanks and good luck.

Thanks! I’ve been neglecting my blog recently, focussed on writing the book. Need to get back to it. Look for more posts next week. Best.

Many thanks for such a positive comment. I will be posting more regularly. 2015 is going to be a great year!

I got this web site from my pal who shared with me regarding this web
site and at the moment this time I am visiting this website and reading
very informative articles at this time.

Really pleased that you are finding this site useful. I will endeavour to post more often. This is my New Year resolution!

I relish, cause I discovered just what I was looking for. You’ve ended my 4
day lengthy hunt! God Bless you man. Have a great day.
Bye

Thanks for the comment. Happy to be of help!

Follow Loving Life in the Rain on WordPress.com
Join 337 other followers